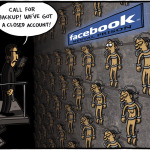 This is my tribute to the cartoonists and journalists on the satirical magazine Charlie Hebdo, that were victims of the foolish extremism in Paris. And also to all the other brave colleagues around the world who, despite threats, and with only their pens as weapons daily keeps challenging hatred and bigotry. You are the true defenders of democracy and […]